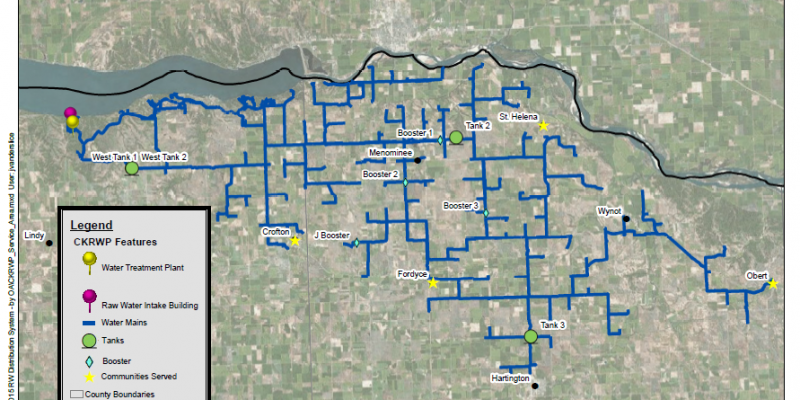 The Cedar Knox Rural Water Project (CKRWP) is a Public Water System (PWS) that serves the communities of Crofton, Fordyce, St. Helena, and Obert; more than 900 rural connections; several sanitary improvement districts (SIDs); recreational areas; and businesses along Lewis and Clark Lake and the Missouri River. The development of CKRWP was the result of a need for adequate quantity of high-quality drinking water, most notably in areas north of Hartington and Crofton.

In the mid 1970’s, a group of residents worked with the Lewis and Clark Natural Resources District (LCNRD) to investigate development of a PWS to serve rural and community needs in northeast Nebraska. At approximately the same time the Devils Nest housing development, which had constructed a water treatment plant that treated surface water from Lewis and Clark Lake was put up for sale. The surface water source and treatment plant provided a possible solution for the regional PWS needs.  The treatment plant was purchased, and construction began on the Cedar Knox Rural Water Project (CKRWP) in 1980. CKRWP began providing drinking water to communities, and rural residents in northeast Nebraska in October of 1981. Initially the system served the communities of Crofton and St. Helena and just over 200 rural customers.

There have been many challenges in relation to utilizing a surface water source to meet drinking water needs on a relatively small scale. Typically, treating surface water is costly due to the likely occurrence of macroorganisms, algae, and pathogens, which require filtration and chlorination at minimum. In 2017, CKRWP was issued an Administrative Order (AO) by the Nebraska Department of Environment and Energy for exceeding the maximum contaminant level (MCL) for the disinfection byproduct Total Trihalomethane (TTHM). The AO must be resolved with a permanent solution that addresses TTHMs.

Additionally, CKRWP faces encroaching sediment in Lewis and Clark Lake which threatens the viability of the intake structure and the ability to draw water to meet long term needs. The sediment originates from the bed of the Missouri River, and from tributaries that discharge into the Missouri River above Gavins Point Dam. These tributaries, including the Niobrara River, deliver up to 60% of the sediment entering Lewis and Clark Lake. The sediment is estimated to cover the intake structure within 20 years and will limit the ability to draw water of sufficient quantity to meet system needs. The proximity of the sediment to the intake structure also results in higher levels of organic matter which must be removed through treatment and disinfection which results in increased levels of TTHM production.

The CKRWP Advisory Committee, which directs operations of the PWS, began investigating solutions to the encroaching sediment and related issues in 2016. With assistance from Bartlett and West Engineering, multiple options to meet current and future needs have been considered. Groundwater resources in northeast Nebraska can be plentiful and of good quality in some areas. However, due to the pre-historic action of glaciers on subsurface geologic materials; the presence and extent of local aquifers is variable. Water quality also varies and is dependent upon the type of aquifer material present. In 2017, CKRWP began conducting groundwater investigations with willing landowners. Groundwater was considered as an alternative due to the high costs associated with other options. The best potential source was identified southwest of Crofton and is commonly referred to as the Dolphin Township sites. Ultimately the CKRWP Advisory Committee and the Lewis and Clark NRD Board of Directors decided that conversion to a groundwater source is the best long-term sustainable solution for the PWS.

The initial phase of the CKRWP source project is to install test wells at the two (2) identified sites and to conduct long-term pumping tests of those wells. Test pumping is performed to assess aquifer properties, determine final production well designs, and define optimum pumping rates and schedules. These tests include monitoring of water levels in constructed observation wells and in existing irrigation, domestic and stock wells to monitor potential changes in water levels caused by pumping the test wells. The results of the long-term tests will allow for protection of both the CKRWP supply and existing groundwater users.

The Cedar Knox Rural Water Project strives to provide quality drinking water and looks forward to serving the need of rural residents and customers long into the future. If you have questions, contact CKRWP at 402-254-6758.