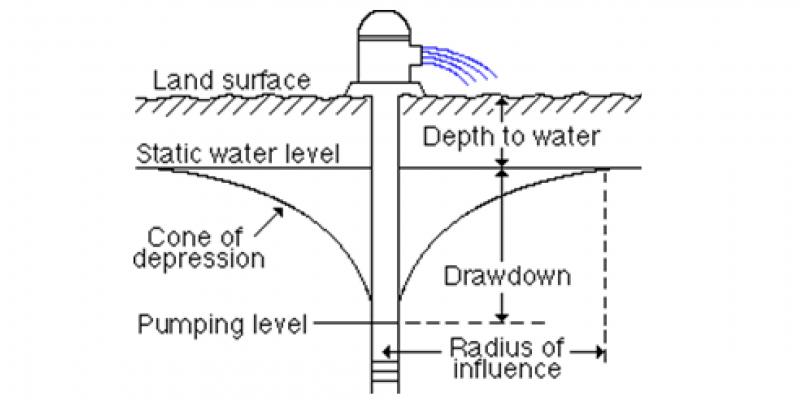 The static water level of 34 irrigation wells, from selected locations throughout the Lewis and Clark Natural Resources District (LCNRD), is measured semi-annually. Fall 2022 readings, following a pumping season that was the second season of heavier than most recent seasons, show average water levels lower than the fall of 2021. All of the 34 wells measured showed a lower water level than in the fall of last year.

Water use across LCNRD is drawn from four main aquifer types, including undifferentiated sand and gravel, Missouri River Alluvium, Niobrara Formation or “chalk”, and Dakota Sandstone Formation aquifers. Comparison of wells developed in the undifferentiated sand and gravel aquifers, which encompass most of the well development across the district, reflected a static water level decrease of about 3.5 feet since last fall. The average water level of the wells being used for observation is around 87 feet from land surface, although there is variation across the District.

Wells along the Missouri River are typically constructed in the Missouri River Alluvium, and water levels in this aquifer correspond closely with the river. Levels in these wells dropped on average 1.3 feet from the fall of 2020, and the average depth to water from the land surface is 20 feet. Lower water levels in this aquifer are likely related to lower river levels having an impact on connected groundwater resources.

Comparison of water levels developed in Niobrara Formation wells were down on average 4.4 feet from last fall. The Niobrara aquifer is a confined aquifer system, and static water levels drop much more quickly under pumping pressure and rebound more quickly with abundant rainfall. The average depth of groundwater in the Niobrara aquifer is 30 feet. These wells are located primarily in northern Cedar County.

In 2013, LCNRD began measuring the water level in four Dakota Sandstone Formation wells in Cedar County. The average water level in these deeply buried sandstone wells was 10.4 feet lower this fall than in the fall of last year. Recharge in this system is much slower than those more commonly utilized in the District.

The purpose of well monitoring in the District is to maintain a record of water levels and their fluctuations throughout the area. Present conditions could result in continued declines in the groundwater supply if pumping is significant in the 2023 irrigation season. If necessary, the District would initiate irrigation control activities to protect groundwater levels through its authorities for groundwater management. The District adopted a 180-day stay of high capacity well permitting effective on November 17, 2022. High-capacity well construction that was permitted prior to the implementation of the stay of development are not impacted by the action.

The wells monitored for static water levels are located randomly across LCNRD from the Elk Point Area north of Ponca to Creighton. Areas of heavy irrigation are typically monitored more than other regions. Much lower-than-average rainfall and above-average irrigation in 2022 has shown declines in groundwater levels. LCNRD anticipates water levels to increase slightly over the winter. If weather patterns continue and irrigation demand remains high, we could expect levels to reflect continued decreases in the spring and fall of 2023.