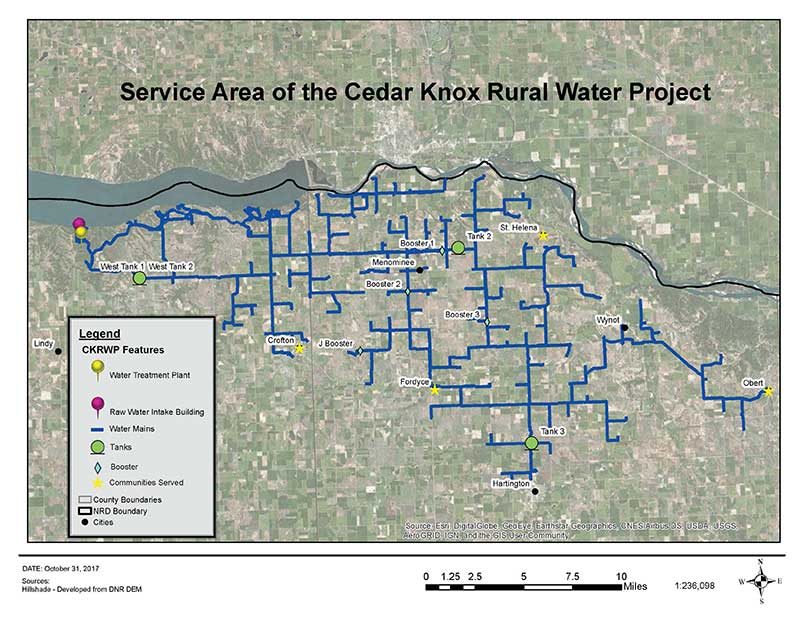 The Cedar-Knox Rural Water Project (CKRWP) provides drinking water to customers in Northeast Nebraska. In the late 1970’s Lewis and Clark Natural Resources District formed a steering committee to look into the possibility of creating a regional water system in response to inconsistent groundwater resources in northern Cedar & Knox Counties. At the time a surface water treatment plant owned by the Knox County SID #2 located in the Devils Nest Region on Lewis and Clark Lake was up for sale.

The water treatment plant was originally built to serve the Devils Nest Development that went bankrupt shortly after construction of the plant. CKRWP purchased the treatment plant in 1980 and water service began to 285 rural service connections and the communities of Crofton and Saint Helena in the fall of 1981.

CKRWP operates one of only five surface water treatment plants in Nebraska, with production capacity of one million gallons per day. Currently there are more than 900 service connections and 4 communities served by CKRWP; Crofton, Fordyce, Saint Helena, and Obert.